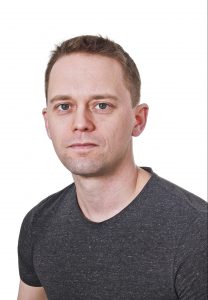 Thomas Freundlich (b. 1975) has worked as freelance choreographer and dancer both in Finland and internationally, and has created some 40 works ranging from ensemble works to solos, opera and theatre productions and dance films.

Freundlich graduated from the professional training program of the Finnish National Ballet school in 2001, and has furthered his dance studies in Boston and New York. In mime and movement theatre, his principal teachers were Adam Darius and Kazimir Kolesnik.

Thomas Freundlich’s choreography includes several groundbreaking projects that have combined contemporary dance with ABB industrial robots. These include the evening-length Human Interface, for two dancers and two robots, which was presented in 2012 at Finland’s Zodiak Centre for New Dance; as well as several large-scale event-choreographies utilizing both traditional six-axis robots as well as latest-generation collaborative models that enable close-range interaction with human performers. Mr. Freundlich also programs the robots himself.

Mr. Freundlich is one of the leading practitioners in Finland’s vibrantly growing independent dance film scene. He has created 13 dance short films and has shot over 100 performance captures, trailers and promo videos for Finnish and international dance companies, theatres and independent choreographers. Freundlich’s dance short film work includes Cold Storage (2016), which has, for the last three years (2017-2019), been the most widely screened Finnish short film at festivals worldwide. To date, Cold Storage has received 39 awards and has been selected by over 280 festivals worldwide. Freundlich’s latest film is Fram (2019), a dance film and documentary co-authored with Valtteri Raekallio and shot in the arctic wilderness of Spitsbergen. From 2012 to 2014, Freundlich and Raekallio were the artistic directors of Finland’s Loikka dance film festival.

Mr. Freundlich’s work has been recognized with some 50 grants and awards from foundations, arts councils and festivals worldwide, including a three-year grant from the Arts Council of Finland 2011–2013.

Dance works by Thomas Freundlich in the Finnish Dance Database